Colorado consistently outperforms other states when it comes to health measures; Colorado’s immunization rates, sadly, are an exception.

Despite recent nationwide outbreaks of preventable diseases like measles and Hepatitis A, our state’s vaccination rates continue to lag, according to an independent report released September 9 by Children’s Hospital Colorado (Children’s Colorado) and the Colorado Children’s Immunization Coalition (CCIC).

The second in a series of reports, the September installment of Vaccine-Preventable Diseases in Colorado’s Children provides the latest update on local and national preventable disease outbreaks and highlights immunization data from 2018-19 and its implications for health and safety in Colorado’s schools and child care facilities. It also underscores the potential economic savings of increased influenza vaccination and examines immunization views reported by Denver religious leaders.

Hepatitis A outbreaks are growing in multiple states, including Colorado. Nationwide, there have been over 24,000 cases and 240 deaths reported from hepatitis A over the past three years. Since fall 2018, Colorado has had over 140 hepatitis A cases and 100 hospitalizations; in September 2019, officials reported the first hepatitis A death in our state. The U.S. has also experienced it’s worst outbreak of measles in nearly 30 years, resulting in more than 1,200 cases nationwide; one of every 10 cases has been hospitalized. Because of these outbreaks, the U.S. is at risk of losing its measles elimination status.

Despite these measles outbreaks, the number of Colorado kindergarteners fully vaccinated and protected against this highly-contagious viral infection dropped this year from 89% in 2017—a stat that ranked Colorado dead last in the nation for kindergarten MMR—to 87% in 2018.

Nearly five percent of kindergarteners submitted exemptions for one or more vaccines in 2018-19, leaving Coloradans, especially the state’s youngest residents, vulnerable to an outbreak. Among exemptions across all ages in Colorado, 89% are for personal belief reasons, 7% are for religious reasons and 3-5% are for medical reasons.

The number of schools which reported their immunization and exemption data to the Colorado Department of Public Health and Environment also decreased in 2018-19, with only 89% of schools and 75% of child cares reporting, compared to 94% and 86% in 2017-18. Compliance, or the percentage of students who have submitted proof of immunization or an exemption for all required vaccines, remains low for Colorado kindergarteners at just 88%.

And though there is no school requirement for the influenza (flu) vaccine, the health and economic burden of flu is incredibly high in Colorado. During the 2017-18 flu season, 79,000 people, including 183 children, died from flu in the U.S. Despite this high death toll, only 45% of Coloradans received a flu vaccine that year.

The Vaccine-Preventable Diseases Report finds that charges treat flu in Colorado in 2017-18 totaled over $367 million; this number represents treatment for the 4,753 people hospitalized with the flu and the 20,550 people who visited an emergency department due to flu. Flu in Colorado also resulted in over 42,000 missed work days in 2017-18. 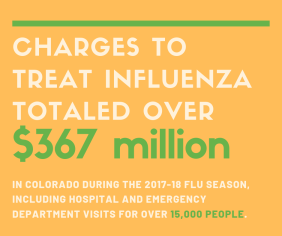 The Report also finds that, if Colorado’s flu vaccination rate increased to just 70%, it’s estimated that we could prevent $22 million in hospital and emergency department charges, and $1.4 million in lost wages and productivity. We’d likely save lives lost to flu, too.

While physicians are parents’ most trusted source of health information, the Report suggests opportunities for religious leaders to participate in immunization conversations with their congregants. A 2016 survey of 100 Denver religious leaders demonstrates low levels of vaccine hesitancy. In fact, 75% of surveyed leaders were not hesitant toward vaccines; however, only 10% had formally spoken about vaccines to their congregants. And while the absolute number of children claiming religious exemptions in Colorado is relatively low, these children are still at risk of contracting and spreading disease. Therefore, religious and community leaders could be key to helping bolster immunization rates in Colorado.