Clinicians: As Measles Outbreaks Grow, Here’s How You Can Help Protect Your Patients

What Is Measles, and What Are the Risks?

Measles, also called rubeola, is a highly contagious respiratory infection caused by a virus. Symptoms of measles include fever, runny nose, cough, red eyes, sore throat, sensitivity to light, and a rash that spreads over the whole body. It is one of the most contagious diseases in existence—so contagious that if one person is infected, 90% of the people around them who are not immune will also contract it.

The high number of measles cases in the U.S. in the first two months of the year is certainly cause for concern. Before the vaccine was introduced in 1963, an average of 400 to 500 people died from measles every year, 48,000 were hospitalized, and 1,000 developed encephalitis (brain swelling) resulting from the disease. Thanks to an effective vaccination program, the number of measles cases dropped from 441,703 cases in 1960 to only 138 cases in 1997. In 2000, measles was officially declared eliminated in the U.S. Each year since then, however, there have been an average of 124 cases of measles each year across the country.

Why Are We Seeing More Cases? 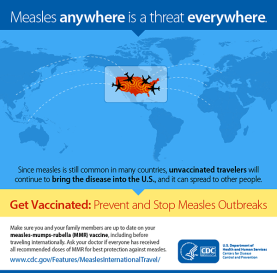 Though the number of measles cases in the U.S. has declined overall since the vaccine became widely used, there has been a recent uptick in cases. This is due in part to lagging immunization rates and an increase in unvaccinated travelers who contract the disease while abroad and bring it to the U.S. Many countries whose measles vaccination rates are low have recently experienced large outbreaks. For instance, in 2018, there were 82,596 cases of measles in 47 countries across Europe. An outbreak of 133 cases in New York began when an unvaccinated child visited Israel, where a large outbreak is occurring, and brought the disease back to a community with low vaccine protection. Small pockets in the U.S. with low vaccination coverage are especially susceptible to outbreaks. For instance, many of this year’s cases stem from an outbreak in Washington state, and nearly all of those involve children who weren’t vaccinated.

In response to the high number of cases in the U.S. so far this year, the Centers for Disease Control and Prevention (CDC) is asking for clinicians’ help to ensure that all patients are up to date on the MMR vaccine. When it comes to vaccinations, parents trust the expertise of their doctor more than anyone else.

What Can I/My Practice Do to Prevent Measles Among My Patients?

From: Adolescents and Teens, Babies, Measles, Vaccine Safety, Vaccine Schedule, Vaccines, Why Vaccinate
← Why I Advocate for the HPV Vaccine After Cancer Took My Husband’s Life
How Does the Colorado Immunization Information System (CIIS) Benefit Colorado’s Public Health Efforts? →
One Comment