One Mother’s Story: The Importance of HPV Vaccination

With three kids a little too close in age, keeping track of who needs which vaccines and when has never been my strong suit. Fortunately, now that they’re getting older, they need fewer shots, and I need fewer post-doctor visit bribes.

My second grader was seemingly in the clear until at least middle school, but this summer, our family’s health history changed. So did my thinking about HPV vaccines, which can be given to girls and boys as early as age 9 as a way to prevent certain kinds of cancers.

My mom, a 56-year-old bookkeeper, was diagnosed with oral cancer in late May. A biopsy later confirmed that her case—a tumor on the back her tongue that had spread to lymph nodes in her throat—was caused by a strain of HPV. 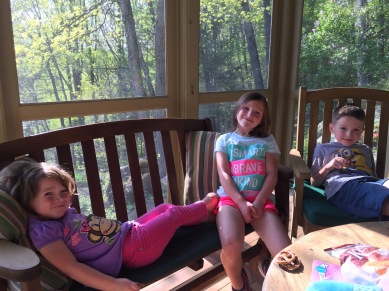 My children in a photo taken by their grandmother just before she was diagnosed with oral cancer.

Officially called human papillomavirus, HPV is the most common sexually transmitted disease, with the Centers for Disease Control and Prevention estimating 80 percent of Americans will have an infection during their lifetime.

There are more than 100 strains of HPV, and it’s the leading cause of oropharyngeal cancers like my mom’s.

HPV is also the leading cause of cervical cancer. It’s the fourth most common cancer in women worldwide, and also the fourth deadliest.

Though I’d heard of Gardasil 9, I hadn’t spent much time considering the value of such immunizations. My daughters, just 4 and 7, surely won’t be sexually active for years.

But I’ve spent the past weeks learning way more than I ever wanted about HPV-related cancers.

Just a month after my mom started chemotherapy, I happened to interview a doctor who helped improve screenings for cervical cancer and reviewed results of the earliest Gardasil trials. Hearing his descriptions of what HPV does to a woman when it goes unrecognized made all-too-real what my children might one day face.

I liken vaccines to any other safety precaution our family takes, from using car seats to wearing sunscreen.

My children and I have fair complexions, and my father died after battling skin cancer. I know we are all at increased risk of developing lesions. So you better believe we use SPF 50 like it’s going out of style. Why wouldn’t I do something to offer them protection from a potentially aggressive form of cancer? 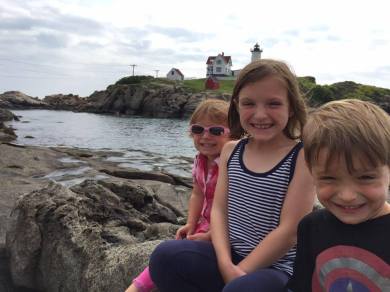 Visiting a lighthouse near their grandma’s house last summer

I’ll be asking my doctor this fall if there are any reasons my oldest shouldn’t get immunized as early as possible. She has no known allergies and has tolerated all of her previous vaccinations well (especially after getting a lollipop from the receptionist). She might not be thrilled, but she knows she doesn’t ever want the treatments her grandma is getting.

For more information about HPV prevention, visit www.cdc.gov/hpv or cancer.org.

Kimberly Graham is a freelance writer specializing in health and education topics.

From: Adolescents and Teens, Guest Post, Guest Teammate, HPV, Why Vaccinate
← Why are we still talking about autism and vaccines? (And why is DeNiro asking us to?)
Why I Chose to Vaccinate →