Surviving Hib Meningitis: An Interview with My Mother

Just over 30 years ago, at 15 months of age, I was diagnosed with bacterial meningitis as a result of Haemophilus influenza type B (Hib) infection. The vaccine that protects against Hib had not yet been introduced. At that time, Hib was the leading cause of bacterial meningitis among children under five years of age in the U.S. Each year, about 20,000 children under five years got severe Hib disease, and about 1,000 died. As many as 1 out of 5 children survivors of Hib meningitis end up with brain damage or become deaf.

Since vaccine introduction in the late 1980s, the number of cases of invasive Hib disease has decreased by more than 99 percent. By 2012, less than 50 U.S. cases of Hib disease occurred each year in children under five, and most cases we see today are the result of parents choosing not to vaccinate. While some parents may believe their child is not at risk of rare Hib infection, the bacteria still exists and can cause severe harm through the diseases it causes.

In honor of World Meningitis Day (April 24) and National Infant Immunization Week (April 18-25), I sat down with my beautiful mother to remember the “traumatic experience” she faced as her child overcame this life-threatening illness.

As a nurse, I’m guessing you were familiar with the disease, but what did you know about Hib and meningitis in 1984?
I was quite familiar with meningitis because I had trained as a neuro-nurse. I was not familiar with Hib at all; I didn’t know anything about any work being done on a vaccine. I knew meningitis could be terminal and that you had very little time to treat it. And I knew the signs and symptoms.

What can you remember about the days leading up to my diagnosis? How did you know I was sick?
Even though you were only 15 months, you were very social. It was Halloween, and I took you to events at your brother’s nursery school, two birthday parties and on a long hike the weekend before. We were all over the place. The pediatrician later commented that you were probably the most social baby in town. Normally you were a pleasant child, but you were very, very cranky.

My family on Christmas in 1984, shortly after I returned home from the hospital.

It wasn’t until Monday morning when I was in the middle of vacuuming that something made me stop to check on you in your crib. Your temperature was very high, you started vomiting, and your neck was stiff. Your three-year-old brother was with me and said, “There’s something wrong with Elizabeth.” I called your Dad and said this baby has meningitis. He told me to get you to the pediatrician right away.

Can you tell about the timeline of events once you realized how sick I was?
By the time I got you to the hospital, you were in a coma. They did a spinal tap and confirmed your meningitis. You didn’t move one muscle during that spinal tap; you were totally out.

The doctors asked if I wanted to send you to Pittsburgh Children’s Hospital, but I told them I didn’t want to waste any time and to start treating you with the antibiotics right away. I knew whatever they were going to do in Pittsburgh, they could do here.

You were in a coma for three days. All I did was cry. It was so scary, and we didn’t know what was going to happen. I rocked you and rocked you and rocked you in the rocking chair. My friends Marion and Stella were there to sit with me all of the time. Your dad would come every evening after his office hours and was very concerned. You were in the hospital two weeks after waking up to complete the antibiotics and for observation. I didn’t leave the hospital for those two weeks; I never left.

What were the doctors saying?
Dr. John Neil cried when the initial diagnosis was made. He was your pediatrician and was pretty undone. He said the worst two diagnoses he could give a parent were meningitis and epiglottitis. He said it’s every parent’s and every physician’s nightmare for a baby. I will never forget that.

You started to wake up after a couple of days, and they assured me you were going to be okay. It is well worth noting one of the reasons we all believe you did so well was that you were still nursing. They really felt that helped with your recovery.

What else stands out in your memory?
You had all these cute little nightgowns, a different one almost every day. I can still see you dragging your IV in your foot around the crib after waking up. You were scared to death of needles and doctors, and you always were after that.

It was also a big deal that 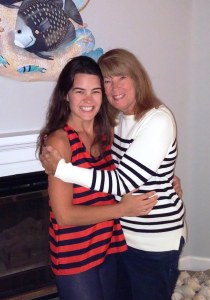 you were a daycare baby. Debbie who ran the daycare felt guilty, and some of the kids were administered rifampin as a prophylaxis. Most were not affected though because you were not in that close contact with them.

It took you a long time to be yourself again; you didn’t look like yourself for weeks after leaving the hospital.

Did you think I was going to die?
Well, there was a good chance of it. When your baby’s laying there in a coma, and there’s nothing you can do about it…I was so scared. Time was of the essence. There was no time to waste, none. Another half hour and you would have been dead.

We were sooo lucky you didn’t experience brain damage or other possible long term complications. I can’t imagine what a parent could be thinking to not vaccinate now that there is a way to prevent this horrific disease.

My mom saved my life. That is just one of the countless reasons I am forever thankful for her.

What is Hib?
Haemophilus Influenzae type b, (Hib), is a bacterium that can cause severe infections, particularly in young children. Hib bacteria can cause many types of invasive disease, including meningitis, pneumonia, cellulitis (skin infection), septic arthritis (joint infection) and epiglottitis (infection of the epiglottis, causing obstruction or closing of the windpipe). The vaccine protects against the diseases caused by Hib, which are numerous and can be severe.

How is Hib Spread?
Usually, the Hib bacteria stay in a person’s nose and throat without causing illness, but if the bacteria spread into the lungs or blood, the person will get very sick. Hib spreads when an infected person coughs or sneezes, and is most common among family members and in childcare centers. It is not as contagious as viruses causing the flu.