Why I’m Thankful for the HPV Vaccine 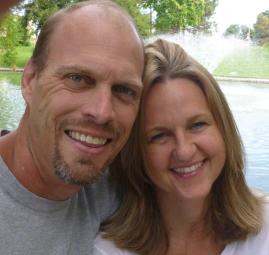 ad, Air Force officer, college professor, and cancer survivor. He’s been married to his wife Shelli for 21 years, has 16- and 14-year-old sons, has served as an aircraft maintenance officer in the Air Force, and currently teaches Political Science at the United States Air Force Academy. He has been cancer-free for 18 months. Joseph and his family live in Colorado Springs, Colo.

I love Thanksgiving. In fact, I think it’s the best holiday of the year. I love the focus on getting together with family and friends, the football games, the food, and the walk after eating the food…if only to prove to yourself that you can, indeed, still move. Some people go to movies on Thanksgiving. Some watch the parades. My wife’s family often spends Thanksgiving night with the advertisement inserts from the newspaper, devising their Black Friday strategy. Until a few years ago, my Thanksgiving memories were pretty typical, I think, nice and predictable. Then I had an appointment with the ENT (ear, nose and throat) surgeon at the Air Force Academy hospital in 2012 about that pesky swollen lymph node that wouldn’t “shrink back down.”

Now Thanksgiving is a little different for me. In addition to family and food and football, I think of cancer, and throat pain, and, believe it or not, the HPV (human papillomavirus) vaccine. I also think of mashed potatoes. Not that I love mashed potatoes; in fact, it probably ranks tenth on my list of Thanksgiving dinner favorites (carrot soufflé is my favorite…yes, carrot…trust me, you gotta try it). But a few years ago, mashed potatoes endeared itself to me in a particularly practical way: it was the only dish I could eat.

A few days before Thanksgiving, 2012, I had my tonsils removed to test that the swollen lymph node on the right side of my throat was indeed due to cancer – HPV-positive oropharyngeal cancer, to be specific. I would go on to experience six weeks of radiation treatment at M.D. Anderson Cancer Center in Houston, plus follow-on surgery to remove a few additional suspicious lymph nodes. The ensuing months added innumerable reasons to be thankful: successful treatment, caring doctors, nurses, and technicians, the incredible support provided by family and friends…and the fact that I was in Houston during February rather than August. But that Thanksgiving I gratefully (and painfully, despite welcome relief from pain medication) helped myself to a third helping of those wonderful potatoes. If I’d known what was coming, I would have enjoyed them even more. Six months from then I wouldn’t be able to taste potatoes, or yogurt, or ice cream, or Ensure, or, thankfully, the pretty nasty shakes my wife was concocting to keep me from losing any more than the 25 pounds (15 percent of my body weight) I’d lost since my treatment ended (more gratitude – I managed to avoid the months of eating through a feeding tube that accompanies most head and neck radiation treatments).

Of course I’m thankful. I had successful treatment, and I seem to be on the back side of cancer. So why does the HPV vaccine make my list of Thanksgiving blessings? One reason is that is provides protection against, what seems to me, a fairly equal opportunity virus. I received my diagnosis a few weeks after passing yet another Air Force physical fitness test. I’m no Navy SEAL, and, yes, I had to stop wrestling with my boys about three years ago, for fear they’d hurt me, but I’m not in bad shape. I’m active, eat pretty well, don’t smoke, and enjoy hiking and skiing and playing basketball. But HPV didn’t seem to care that I was an otherwise healthy person.

Another reason is that I have two teenage sons, neither of whom has shown too much excitement about girls, yet. My wife and I have strong feelings about appropriate behavior between teenagers and have consistently preached a message of abstinence to our boys. But we’re both pretty realistic about the dwindling control we have over them as, in developmentally appropriate ways, they seek increasing autonomy. Here’s the deal: I hope neither of my sons is exposed to HPV. But, given what we’re learning about how HPV is transmitted, that would be fairly extraordinary. In fact, HPV is so common that nearly all sexually-active men and women will get at least one type of HPV at some point in their lives. Most people won’t know they have it, but there is no way to know which people who get HPV will develop cancer or other health problems. So I’m thankful that even if, God forbid, they only make almost all the right choices, there’s at least one thing I can be almost certain of: with the HPV vaccine neither of them will be diagnosed with HPV-positive throat cancer.

From: Guest Dad, Guest Post, Guest Teammate, HPV, Vaccines, Why Vaccinate
← Immunology 101 Series: The Science Behind Flu Vaccines…and Why You Need One Every Year
Measles Redux, The Unnecessary Epidemic →